With the erection of my new horizontal loop antenna, I’ve found all of a sudden that I have quite a bit more signal for my transceivers to listen to. However, that’s brought with it the problem that it’s also picking up very strong broadcast band signals that are overloading at least some of my rigs front ends. In particular, my KN-Q7A has little protection from this sort of overload and is badly affected to the point of being unusable with this antenna. This is a known problem with the rig and is simply a limitation of it’s basic design.

To see how bad the interference was, I connected the antenna to a Spectrum Analyzer. The result is shown below. 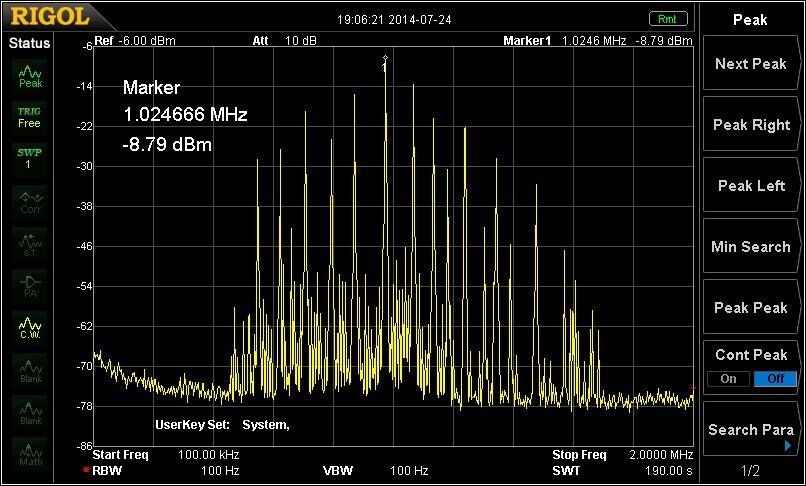 As you can see, the strongest signal is ABC 1026 at only -9 dBm – that’s greater than S9+64dB! The sheer number of similarly strong signals is a bit much for many simple receivers to cope with.

The answer was fairly obvious – a broadcast band filter. I looked at the commercially available units and found that filters capable of being transmitted through at the 100W level were expensive, so I decided to build my own as they are not complex devices.

I first modeled a filter using ELSIE free version and found that a 7-pole Chebychev filter looked like it would do the job. I set the cutoff frequency to just below 3.5MHz as I am unlikely to get on 160m with the space I have available. The model indicated that I should be at least 40 dB down by 1.7MHz which should be sufficient.

The circuit is as follows (as drawn in LT SPICE IV):

The following table has the component values and expected component currents and voltages at 100W. It also has the winding details for the inductors (note that the wire lengths are for the winding itself – add maybe 10cm to leave enough for connections to other components). I used type 6 material to ensure good performance to at least the top of the HF band and the T130 size is large enough to avoid saturation at 100W. The 1 mm enamelled wire keeps the RF resistance low to reduce loss. The capacitors are 500V silver mica units which have been used many times in 100W class filters over the years and proven reliable.

I built the filter in a simple diecast box mounting the inductors using discs of kitchen polyethylene chopping board to separate them from the box. The other components are simply wired point-point with SO239 sockets on each end of the box. The unit is completely symmetrical, so it doesn’t matter which way round it goes. 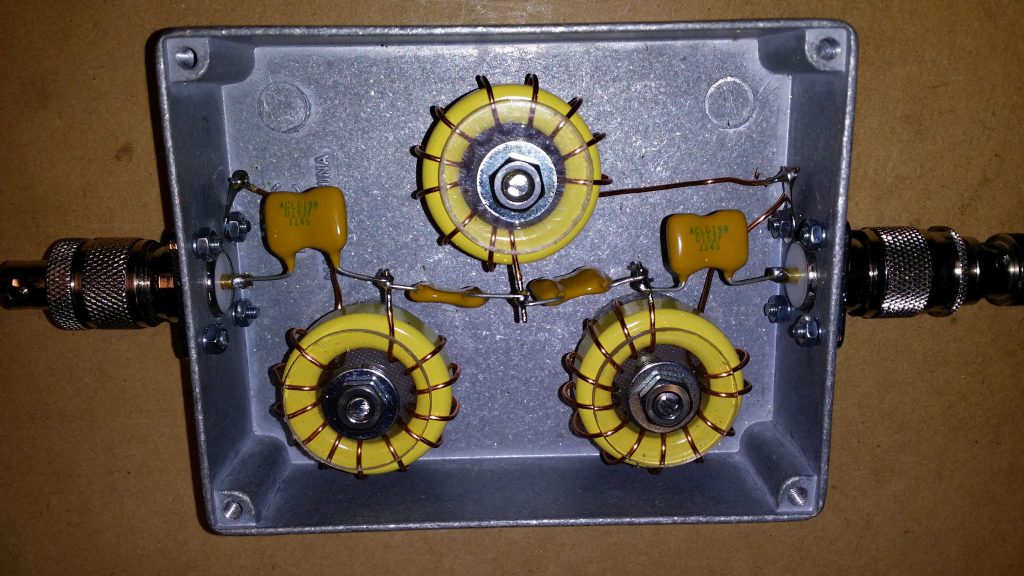 This has been tested to 100W with 2 min carrier into a dummy load leading to only mild heating of the capacitors on all bands from 80m through 10m.

I put the filter on my N2PK VNA and was pleased with it’s actual performance as indicated in the following traces:

This is an expanded view of the insertion loss across the band to 55MHz. Above 80m, it is less than 0.07dB which is excellent. on the 80m band it peaks at 0.2dB which is still quite acceptable.

The final test was to look at the broadcast band with the filter in-line. Here’s the plot: 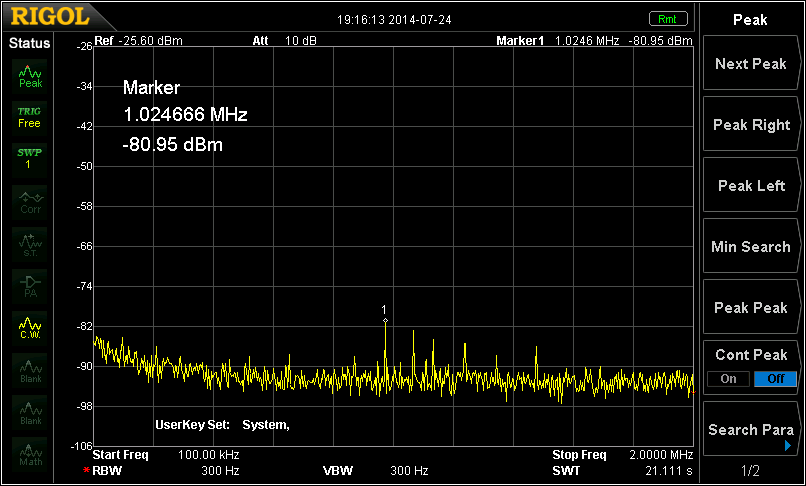 As you can see, the interference has been dramatically reduced with the strongest signal now at -81 dBm (about S7) – about 72 dB better than without the filter. Needless to say, the KN-Q7A now works well with the loop antenna.