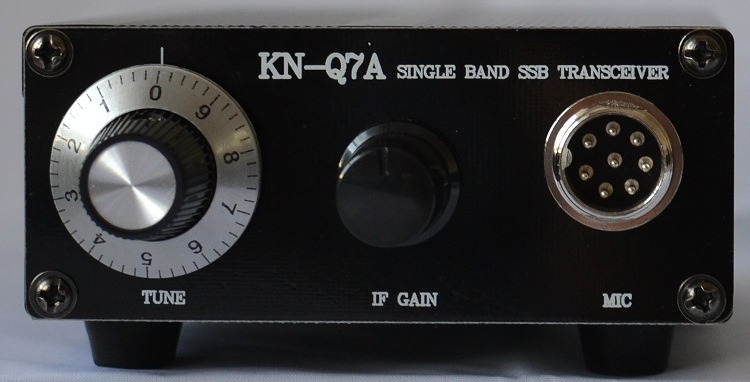 I purchased a KN-Q7A kit from crkits.com in China. The kit is well made and the instructions are excellent. It is a low cost and light weight SSB transceiver for 40m. Naturally to keep it simple and keep the cost down, there are trade-offs in the design. There are three elements that were a concern for me:

I wanted to keep the compact case and the excellent receive current drain (about 60mA) as far as possible, so resolved to squeeze everything into the upper portion of the existing case.

The problem with the 7808 regulator is that its dropout voltage is up to 2V. When combined with the nearly 1V drop on the reverse battery protection diode under transmit current levels, then the 8V rail regulation stops when the battery gets to around 11V. This is too high for driving with 3S LiPos which can be drained to around 10V.

This is relatively easy to solve with the replacement of the 7808 by an LDO regulator. In my case I chose a LM2940-8.0. It requires a 22uF tantalum capacitor directly across the output for stability and a SMD capacitor fitted nicely.

I also changed the reverse voltage diode to a power schottky diode. The transmitter now works down to an input voltage of about 8.5V which is excellent.

The obvious solution to a better VFO was to go with a modern DDS. As it happens there is an excellent kit available from N3ZI. I built this and added a non-backlit LCD to keep the current draw as low as possible. The output of this module can be fed directly to the oscillator input of the LO mixer. This provides full coverage of the 40m band.

The BPFs in the rig are optimized to be only about 150 kHz wide, so a little narrow to cover the whole band. I modified these by replacing the 2pF middle capacitor with a 3.3pF capacitor. This widened the coverage somewhat, but beyond 7.150MHz, the response drops down a few dB.

I was concerned that the digital electronics might interfere with the RX, but so far have had no noticeable effect other than a mild clicking as the rotary encoder is turned.

The RX current drain has increased to just 120mA (about 1.5W) which would run for 18 hours on a 2200mAh LiPo! Here’s a couple of photos of the completed modification. 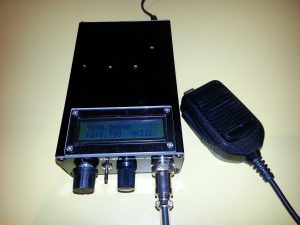 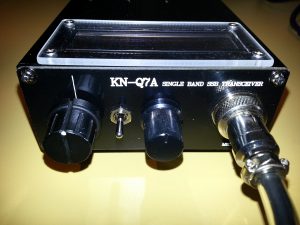 Front panel of modified KN-Q7A. The tune knob on the left is now the rotary encoder for the DDS. The additional toggle switch is the memory selector for the DDS.

When I explored the IMD performance of the rig, I found it fairly mediocre. 3rd order products were about -10dB to the tones which is not great. Some of the IMD seemed to be coming from the final PA stage with smaller amounts spread across the earlier stages.

The rig uses a single IRF640 MOSFET for the final PA which, as a switching transistor, is not really designed for linear applications. I decided to implement a separate new PA stage and then reduce the drive level to the point where a cleaner output resulted.

I decided to re-design the final PA to use RF MOSFETs (RD16HHF1) in a push-pull configuration. The design is borrowed almost directly from Loftur Jonasson (TF3LJ/VE2LJX). To his design I added a LPF based on the work of W3NQN. I also added a transmit current monitor to provide a very compact way of monitoring the transmitter output – useful for identifying antenna or other faults in the field. 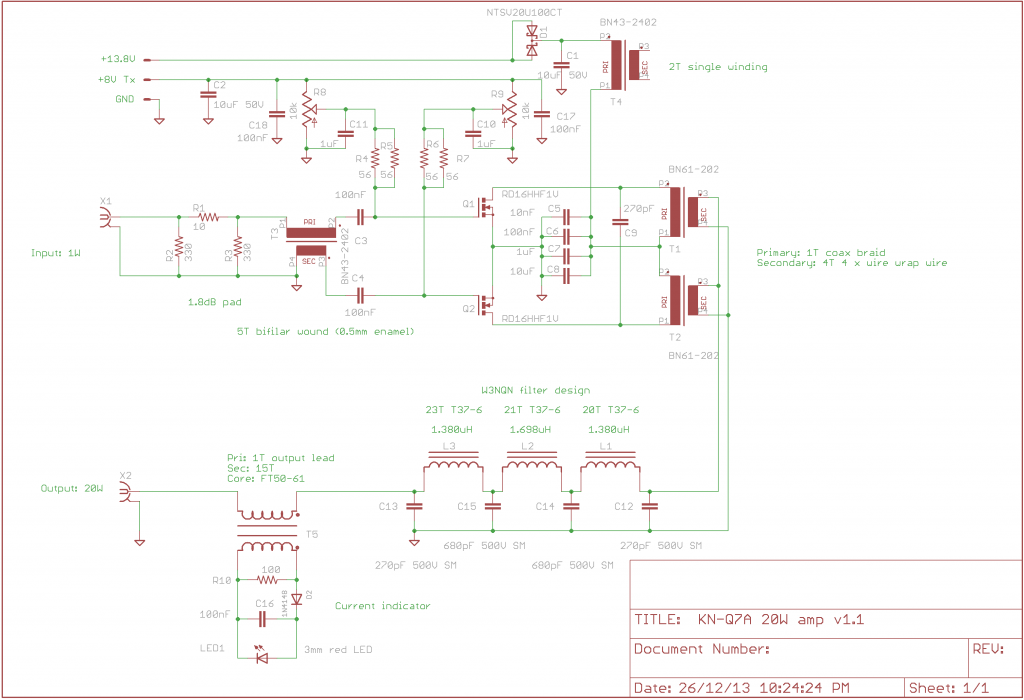 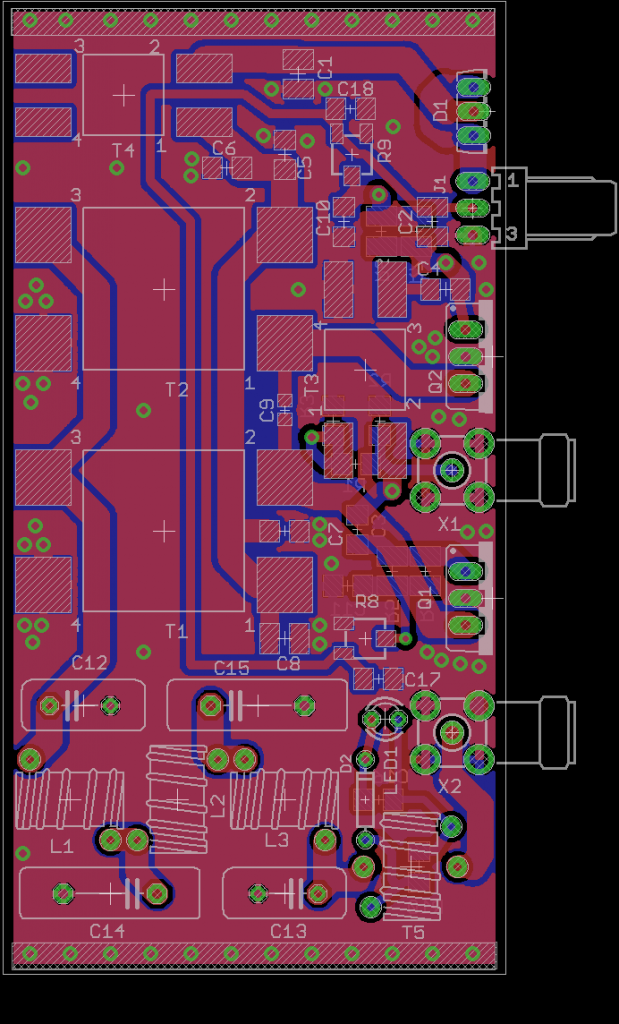 The PCB is designed to fit neatly into the slots in the upper section of the case in much the same way as the main PCB. The MOSFETs and the Schottky diode are bolted to the case for heatsinking. The LED is installed on the back side of the PCB and protrudes through a small hole in the lid of the case. The amplifier is inserted between the output of the existing LPF on the main board and the T/R relay.The +8V bias supply is taken from the +8VT line on the main board to ensure that bias is only applied during TX. Bias is set to 450mA per MOSFET, which is significantly higher than the 60mA for the main PA. However, as it’s only biased during TX, in practice it does not significantly increase the battery drain overall.

The output of the existing rig needs to be dropped substantially to about 1W input to the new amplifier module. This is achieved by reducing the microphone drive level significantly by changing the 10k electret mic bias resistor to 3.3k.

The new amplifier is capable of approx 20W output at 13.8V drawing 3.7A (with a 42mVp-p sine wave at pin 2 of the modulator). The measured overall rig efficiency is 42% which is OK for this class of amplifier.

There is no bias stabilization in the circuit and the bias current does change significantly as the MOSFETs heat up. However, this does not appear to affect linearity or lead to a runaway condition and so is deemed acceptable. A thermistor/resistor to ground could be added to the bias circuits if this became a problem.

One other source of IMD that was identified was T3, the original output stage impedance matching transformer. This is a 1:4 transmission line transformer stepping up the output of the final PA transistor to 50 ohms for the final LPF. As originally constructed, this was 5T on a FT37-43 toroid. It appeared to be generating several dB of IMD, potentially due to there being insufficient reactance to prevent normal transformer mode operation. It was also getting extremely hot (>100 deg C after 10 min carrier).

Reading about transmission line transformers indicated that in power applications, low permeability cores are preferred and that type 61 material had much lower loss than type 43 and so I re-constructed this transformer as 15 bifilar turns on a FT50A-61 core. This seems to have removed this source of IMD and temperature rise is no longer a problem.

Measured 3rd order IMD is now improved to: -16dB at maximum output – this is still only average, but much improved over the original. The transmitted audio is, while not completely clean, at least quite intelligible and is not splattering.

There output spectrum is very clean with no measurable harmonics to the -60dB level and BFO products are less than -47dBc: 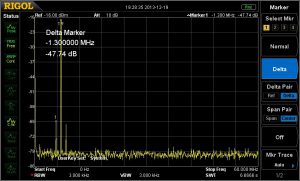 Spectral view with single tone carrier at 20W output and 13.8V supply. Note that all spurious products are better than -47dBc.

The design is fairly conservative and the amplifier will cope with continuous carrier for 10min without overheating. The case gets to about 50 deg C after this time, but this is quite extreme and should pose no problems in normal use for SSB or digital mode QSOs.

Here’s a few photos of the completed amplifier (note that this was the first iteration of the PCB which had a couple of minor errors in it): 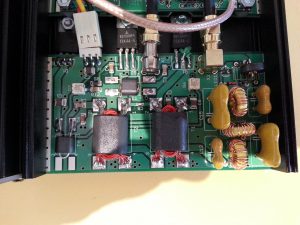 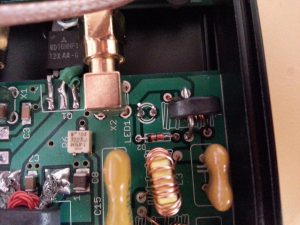 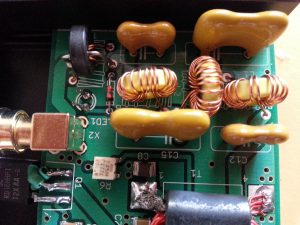 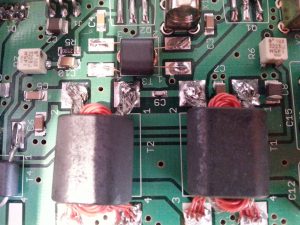 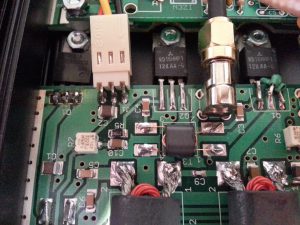 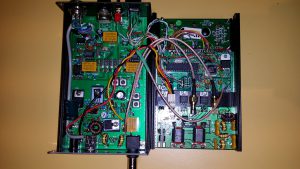 Whole radio – original components on the left and DDS and amp on the right. 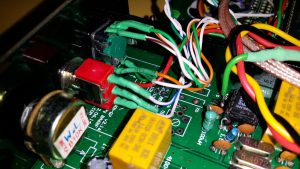 Connection to rotary encoder and switch. Note all components from original VXO have been removed. 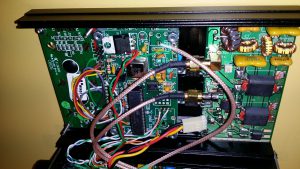 The whole lid with DDS display, DDS board and amplifier board 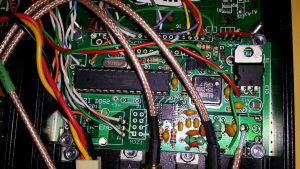 DDS board attached to a plain board secured by slots in case. 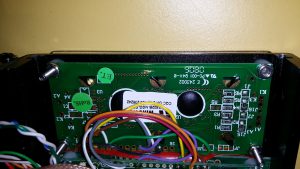 The biggest practical issue I’ve found in using this transceiver is the lack of AGC. Turning the gain up to hear a weak station only to be blasted by a higher power station gets tiring!

I’ve recently discovered a neat little mod kit for the X1M transceiver to add AGC to it. The mod was designed by Dale W4OP and is described here: X1M AGC mod and here: X1M AGC mod manual. It was available as a kit from W5COV’s “QRP Fun” (site no longer seems to exist).

The mod is basically an audio-derived AGC amplifier the output of which is fed into pin 5 of the MC1350 IF amplifier (its AGC control pin). In the KN-Q7A, the AGC pin of the MC1350 is connected to the IF gain pot as the means to control the IF gain of the rig. The X1M has a fixed IF gain and variable AF gain, so the mod is setup to change the X1M IF gain to be driven from the AGC amplifier and the AF is picked up before the AF gain control (see the manual above).

In the KN-Q7A, there is no AF gain control. I found that using the input to the audio amplifier as the pickup point did not work for this rig as it loaded down the product detector/modulator and seriously reduced the output power on TX. Hence I modified the mod to reduce the gain of the AGC amp to unity and picked up the audio on the output of the AF amplifier – specifically the top of the 10 ohm resistor that forms an output high frequency shunt on the audio output. Reducing the amplifier gain to unity is simply a matter of adding a 50k resistor in series with the AF input (at W3 on the mod schematic). 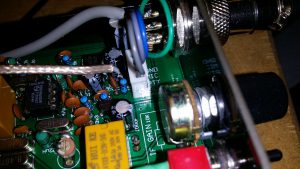 To connect it to the KN-Q7A MC1350 chip and retain gain control is simply a matter of removing the 10k resistor between the IF gain pot and pin 5 of the MC1350 and connecting the pot side of the resulting gap in the circuit to the wiper pad on the mod circuit board (you don’t fit the pot supplied in the kit as the IF gain control replaces it). The MC1350 pin 5 side of the gap goes directly to the W4 pad on the mod board. 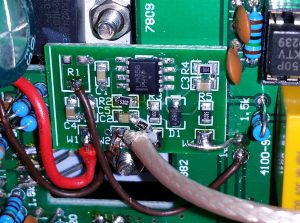 Here’s a close up of the AGC amp board showing the additional resistor added between C2 and the input pad (cut the original trace). You can also clearly see the connection to the pads where the 10k resistor was removed.

The +9V supply pad on the mod connects to a convenient +8V pad on the KN-Q7A and of course Gnd goes to Gnd.

I used shielded wire to connect the lead from the AF amp back to the AGC board to avoid unwanted coupling (shield only connected at the AGC board end). 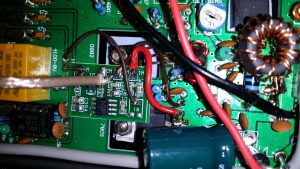 Here’s the AGC board attached to the main board with double sided tape. The power wires connect to convenient pads and you can see the shielded cable going to the audio amplifier pick up point.

Using AGC is simply a matter of setting the IF gain pot to a suitable level (around mid-range) and letting the AGC do it’s job. You can effectively disable the AGC by turning the IF gain to maximum.

Being audio derived, there is a delay in reducing the gain which leads to a brief thump when a high level signal is received before the AGC kicks in. The only cure for this would be to use an RF source for the AGC which is more complex to implement.

The kit board fits very neatly with double sided tape between the voltage regulator and the driver transistor.

This has been a worthwhile improvement to the rig.